The 1st settlement in the area of Cottonwood Falls was in 1854, when an Indian trader named Seth Hayes founded a cattle ranch on the Cottonwood River close to the mouth of the Diamond Spring Creak.  The area around the town was organized as Chase County in 1859, and Cottonwood Falls was designated the temporary county seat.

North of Cottonwood Falls is the Cottonwood Falls bridge and dam.  The 1st dam at this site was constructed of cottonwood logs in 1860, which provided water power for a saw and grist mill.  In 1906 the dam was expanded and used to generate electricity.  The present dam is constructed from cut limestone which was later covered with concrete.

The first major bridge at Cottonwood Falls was a 150 foot long iron truss bridge constructed in 1872.  The present bridge was constructed in 1914 by the Missouri Valley Bridge Company of Leavenworth, Kansas.  It is one of only three remaining reinforced masonry, earth filled arch bridges that were designed by Daniel B. Luten and is listed on the National Register of Historic Places today.

The 1st post office in Cottonwood Falls was established in 1858.

In 1872, the city’s French Renaissance style Chase County Courthouse, that sits at the head of Broadway,  was built; at roughly the same time, the Atchison, Topeka and Santa Fe Railway reached the Cottonwood Falls area.  Through the late 19th and early 20th centuries the area around the city mainly divided into farms and cattle ranches. 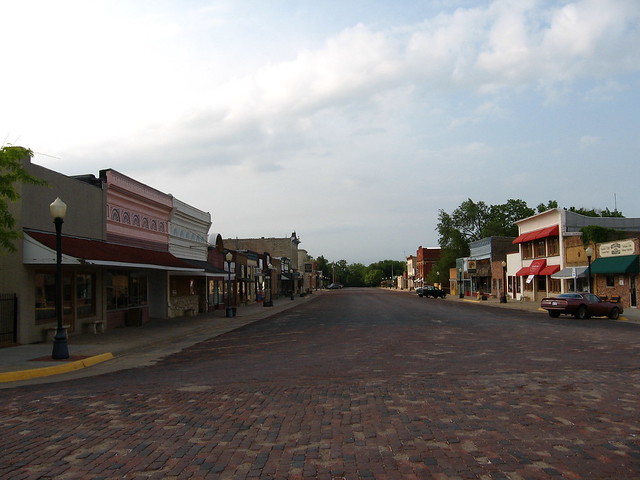 Today, the city of Cottonwood Falls is a third class city with a population of 874 residents.

While Broadway is but 3 blocks long, it is home to art galleries, boutiques, antique stores, museums, and restaurants.  Broadway St. ends at the beautiful historic stone bridge, the site of the annual River Suite.  It lies just 2 blocks to the West of KS Hwy 177, which is also known as the “Flint Hills Scenic Byway”, one of the eight wonders of Kansas.